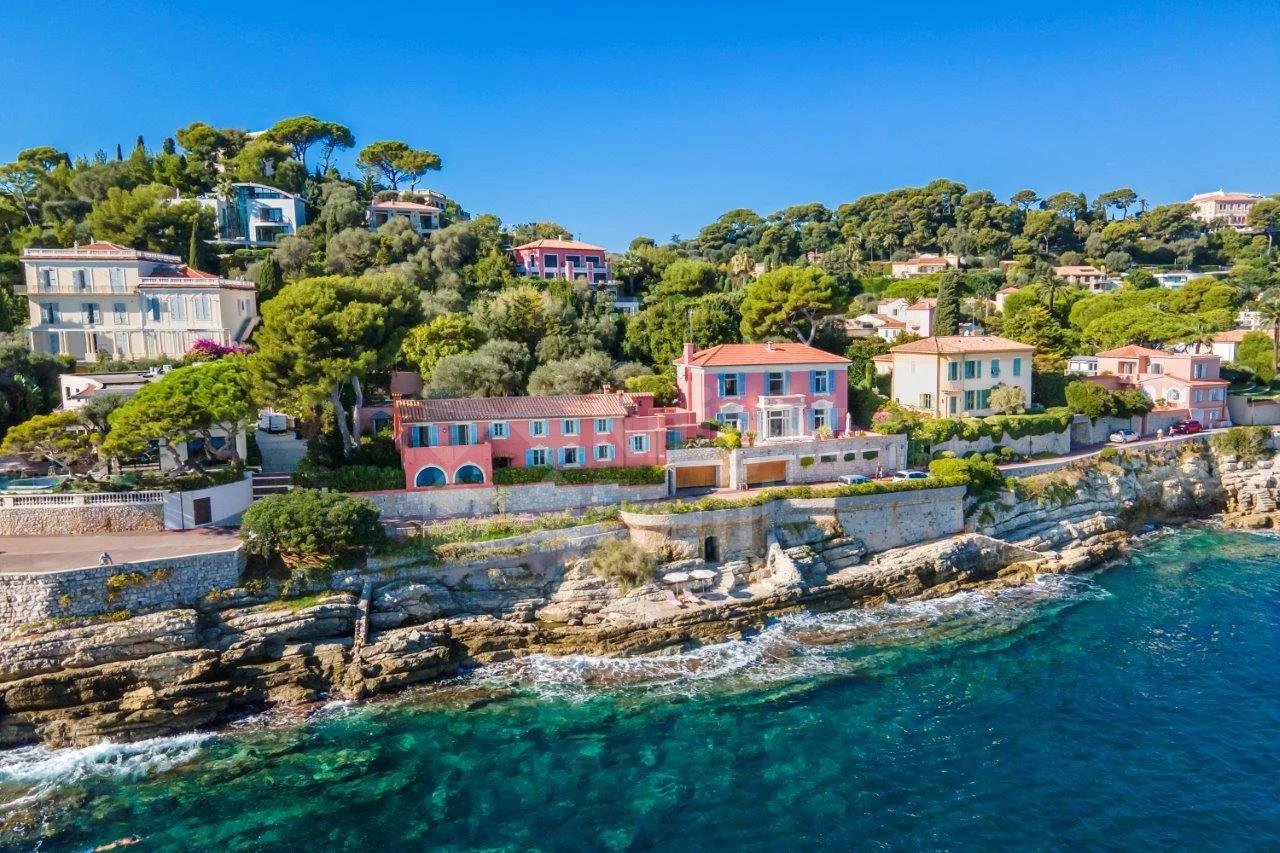 The region is a wealth of luxury, sophistication and style, with its breathtaking beauty almost, but not quite, beyond description.

Celebrated artists and writers fortunately discovered this little piece of heaven on Earth in the mid 19th century and since then this fairytale strip of coastline has been a haven for those who appreciate the finer things in life.  With its peaceful ambiance and year round warm climate; Cap Ferrat is a popular destination in South East France. Some even describe it as the Riviera’s best kept secret.

In more recent times, Elizabeth Taylor, David Niven, Charlie Chaplin, Somerset Maugham, and Gregory Peck all enjoyed the lifestyle this glamorous retreat has to offer; former Presidents of France too favoured the resort above those of its better known neighbours along the coast, finding its quiet and more sedate character a welcome retreat from the  stresses of political office. One of the most glamorous hotels in Cap Ferrat, and indeed the world, the Grand-Hotel du Cap-Ferrat was built around 1908; this imposing building resembles a grand white palace, towering and dominating all in its shadow.  Its guest list includes George W. Bush and Bill Clinton.  Princess Louise, Queen Victoria's daughter, retained residency for many seasons and was regularly joined by her brother the Prince Arthur, Duke of Connaught and Strathearn who lived for more than twenty years in the area.

The pearl of the French Riviera is how Saint-Jean-Cap-Ferrat is better known. Two of the main activities in Cap-Ferrat are simply strolling along the beautiful pathways surrounding the peninsular, admiring the stunning views and grand villas, and enjoying the gastronomic delights which the numerous superb restaurants have to offer. Cap Ferrat is blessed with outstanding beaches. Plage la Paloma south of St.Jean Cap Ferrat has been voted amongst the ten best beaches on the Côte d'Azur. Other beaches include Paloma beach lying southeast of the port and Passable beach situated on the northwest side of the main peninsula, revealing stunning views across the Rade de Villefranche.  The largest beach on the Cap Ferrat is the Cro de Pei Pin located just north of the bay between the main peninsular and the smaller St Hospice peninsula. Set back discreetly from the imposing shoreline are beautiful private residences. Property in these areas is prestigious and much sought after with the grand villas tastefully hidden for the most part in the depths of sumptuous tropical gardens.

Things To Do In St Jean Cap Ferrat

The villa is was constructed and built on the smallest part of the Saint-Jean-Cap-Ferrat peninsula, and could possibly be one of the most beautiful piece of architecture on the Côte d’Azur. The building is very reminiscent of an Italian palazzo, as the exterior of the building makes many design references to the schools in Florence and Venice.

There are seven different themed gardens where you are able to explore the grandeur of the French garden, the green opulence of the Spanish garden, and the exotic brilliance of the Japanese gardens.

It is believed that Beatrice Ephrussi de Rothschild considered the Villa Ile de France as an ocean liner and employed twenty gardeners to maintain the grounds whilst wearing full sailor uniforms.

You can take a walk down the winding beach path from Beaulieu, which is known as Promenade Maurice Rouvier, where you will find the oldest villas in the area. The residence built in 1880, was previously known as Lo Scoglietto and translates as 'Little Rock'; has it's own private harbour.

The home has been lived in by many of the rich and famous, as in 1920 the villa was rented by the Duchess of Marlborough. It was then extended in the 1950s and rented by none other than Leopold III, Kind of the Belgians. In later years, the villa was then lived in by the fantastic Charlie Chaplin, who sold it to famous film actor David Niven in 1960.

The house itself is famed for appearing in the 1983 movie Trail of the Pink Panther, in which Niven cameoed.

The square in front of the villa is now renowned as Place David Niven, which was a tribute to the actor after he passed. The Villa has now changed name and is now known as Fleur du Cap'.

Port Nouveau is a small port but hosts a multitude of lovely restaurants and cafes to eat, drink and relax in.

The port was once a small fishing port, but it has now evolved into a much larger yacht harbour.

If you take a walk uphill from the port, you will come across the Chapelle St Hospice which has a statue of the virgin Mary situated outside of it. It is said that Saint Hospitius lived there circa 580; and allegedly chained himself with an iron chain and lived on a diet of bread, dates and water. People say that he was blessed with a gift to create miracles and prophesied about many happenings. Within the Chapelle, you can see a displayed painting in which St Hospice meets his death.

If you enter the chapel, there is a book in which visitors or locals of St Jean Cap Ferrat can write down their wishes or aspirations to be answered. Many people visit the Chapelle just to write in the book.

International House Nice - You will have to make a 20 minute drive, but this is a fantastic school that teaches French and is the only one on the French Riviera. The school is situated on the 1st floor of IPAG, one of Nice's most prestigious business schools. This is a great location for students who can easily meet French students and make use of all the facilities that a university has to offer.

ABC School - The ABC School is situated in Nice and is also a 20 minute drive from the town. The school is a private and is billingual, which will suit both French residents and expats in the French Riviera. The school incorporates nursery, primary and secondary students into it's education programme and also allows pupils from Year 2 to Year 9 to take Cambridge ESOL exams according to their level.

Private School Michelet - This school is around a 30 minute drive from St Jean Cap Ferrat.

By train - The Nice-Ventimiglia train travels along the coast of France and stops at Villefranche-sur-Mer and Beaulieu-sur-Mer. You will then be able to get a bus to St Jean Cap-Ferrat from Nice's central bus station.

By bus - There are buses available to travel to St Jean Cap Ferrat from nearby Villefranche-sur-Mer, which is around 10 minutes away.

By road - Getting to St Jean Cap Ferrat by car is quite simple. If you are coming from Nice, it's around 11 miles and will take you 30 minutes in the car, depending on traffic.

Investment opportunities in Saint Jean Cap Ferrat are excellent and will enhance any real estate portfolio. Whether you prefer a more secluded spot from which to enjoy the beauties of this most famous and desired part of the Riviera, or a modern, state of the art luxury apartment in the very heart of this delightful town, our professional and friendly staff are here to advise and assist you.

If St Jean Cap Ferrat doesn't sound like the ideal location for you, there are always the neighbouring places to visit. Every commune differs in such a way that makes the French Riviera an extremely popular place to live, with different cities harbouring different features and characteristics.